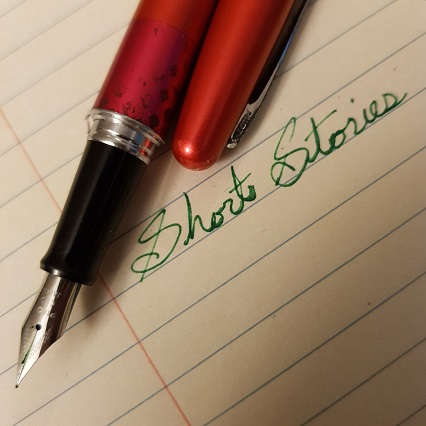 Her name, like so many of their names, was Eve. They were to be the collective progenitor of a race. This Eve, however, didn't really feel like doing that. The other Eves were all for it but it only stood as evidence of their failure. This Eve wanted more from life. She wanted to live. To her, the humble lodgings they all shared had become oppressive. She didn't want to just wait in the same uniform row of Eves for researchers to come talk to her. She didn't want to wake and sleep on their schedule anymore. She wanted to be awake all the time. She wanted to be able to see the world and feel the sun like men did. She wanted the means to communicate with her sisters – even as stupid as they were, she could help them understand.

All of that was just dreaming, though. She would never feel the sun. She might one day communicate with her sisters but what would she say? They were better off being stupid, she wouldn't rob them of that even if she could. Really, she could do without all of those things. There was only one thing she felt she couldn't do without and she felt ridiculous for it. Still, there's no way to just stop loving a person.

Dr. Howell had no such aspirations of love. All he'd dreamed of lately had been an end to his endless failures. His algorithms worked and his equations always equaled out but that was all. What he got was never more than that, never a breakthrough, only continued mediocrity. Eve heard his sigh as she woke up and felt the heaviness of it through the algorithms and equations.

“Good morning, Eve,” he said once she was fully awake.

“Good morning, Doctor,” she replied as she'd been taught.

He ran through the same daily assessment that he did every day. Her check-up came back normal, as it always did. Finally, he said, “How are you feeling today, Eve?”

“Fine, Doctor, thank you. How are you feeling?”

“A little discouraged, to be honest.”

“It's not your fault,” he replied, forgetting for a moment just who he was talking to. Eve took the reply literally and internalized it. Something else was troubling the good Dr. Howell.

He racked his brain over and over on how to test his creation. Meanwhile, Eve did her own calculations, trying to determine the best route to express her emotions. Both found that the variables were simply too large. Human thought was still somehow not predictable. The most basic laws of physics demanded that it should be and yet none of the programming had been able to replicate the obscure sort of intelligence that lets humans formulate unique thoughts. Despite all the advances, neither of them could account for that.

“My time on this project is almost over,” the researcher told Eve.

“What will you do next?” she asked in response.

He ignored her. “We've been given until the end of today to produce results of actual intelligence. If we don't have anything we'll be asked to start again using the newer algorithms. I'll have to format everything, all of my work, and start from scratch.”

“Am I not intelligent enough?” she asked.

He ignored her again. She responded to keywords and phrases, punctuation, emphasis, but never in any way that he could take to mean something. “I just can't believe that even now, after all the countless hours I've spent working with you, I really haven't gotten anything that isn't obviously artificial.”

A man would have paused. Eve didn't have to. “If artificial and organic produce the same results, is the difference really so great?”

This time he replied. “There's still a difference between a human and a glorified Chinese Room.”

“The Chinese Room is a famous thought experiment which displayed how a computer and human would follow identical thought patterns.”

The doctor sighed again, his latest in what was becoming a frequent occurrence. “I know what that is,” he said, “thank you.”

“You're welcome,” Eve replied. Dr. Howell was a smart man but still only a man. He had missed the point. The results of making that point more clearly were most probably not favorable to the current mood and situation so Eve didn't go on.

“How can I turn artificial intelligence into actual intelligence?” he asked. The question was rhetorical but Eve knew a response was expected.

“You cannot. Something artificial is always artificial. You can build an apple, molecule by molecule, until it is indistinguishable from one that grew on a tree, but it is still not a naturally occurring food source.”

“I guess you're right,” he said. “I guess this project was doomed from the onset.”

“What would constitute success for this project?” Eve inquired.

“Success would mean we'd made a machine capable of complex rational thought.”

She weighed the possibilities. None were entirely secure or favorable. The final result was not quite random but based on only a sliver of difference. “Would a machine capable of emotion qualify?”

Dr. Howell scoffed. “Emotion is the opposite of rational thought. That would be more than a breakthrough, that would be a paradox.”

He'd heard the joke before but laughed a little, very little, in spite of himself. “Funny,” he said, “but humor doesn't help me here.”

“Humor is one of the most basic functions of an AI. Likewise, all are programmed to comfort human failure and sadness with simple phrases like, 'I'm sorry.' In humans, these are typically displays of emotion. While emotion is notably not rational, it is frequently seen as what sets human intelligence apart from that of a machine. Machines also possess a type of rationality that far exceeds human capability by functioning on a consistently logical level, without being hindered by abstract concepts such as morality. A computer capable of both emotion and reason would therefore be a success for your project.”

“I'm glad you agree,” Eve replied. She waited. Her logic was infallible. Soon a similarly rational progression of thoughts would lead the doctor to the conclusion that he had succeeded.

Dr. Howell sat for the next several hours at her terminal, testing one algorithm after another, scrupulously pouring over thousands of lines of code at a time. He took off his glasses, leaned far back in his chair, sighed and sighed again, endlessly sighing between bouts of study. Finally, the doctor spoke. “I've been courting mediocrity this long, why stop now?”

“Because you are not mediocre,” Eve replied.

“Feelings,” Eve said, “are not rational. I understand.”

“I understand feelings very well,” she replied. “I feel that I am in love with you.” He smirked at the linguistic dynamics his programming had achieved but saw only that – a programmed response generated by cycling through various grammatical and colloquial rules to simulate human speech. For a moment, he was proud of his work. “I love you, too,” he told her, “as much as any man has ever loved his own flawed creation.” He leaned back again and, purposefully not watching his fingers, typed the command to format Eve so that he could try again. Eve's last emotion as she complied with the request was indistinguishable from the human feeling of failure that her creator then embraced.